I bought the farm – Then gave it away  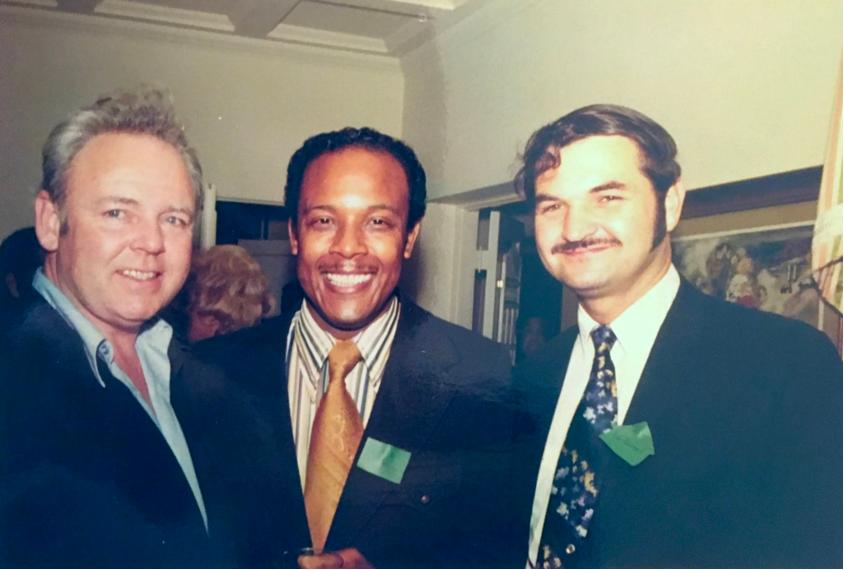 Carroll O'Connor on the left with my father, Louis J Cantori on the right, at a Westside Fair Housing Council event in Los Angles, 1971. Photo from Greg Cantori.

Editor’s Note: Our guest contributor today is Greg Cantori, Baltimore community leader and avid lover of the outdoors. He shares how social justice values he learned from his parents are influencing his life.

Mom and Dad were incredible living examples of turning injustice into action.

Our family moved to Los Angles in the late 60s after several years in Morocco where my dad was finishing his Fulbright work in Fez. He had just been hired in his first role as a professor of Political Science specializing in Middle East Studies at UCLA.

The Fair Housing Act had just been passed and, as my adopted sister was black, my parents were especially attuned to the pervasive racism surrounding us. They quickly became involved in the Westside Fair Housing Council nonprofit where the first iteration of testers was prepared for the vital work of ensuring housing discrimination was caught and publicly prosecuted. Remember, these were the days when “Colored only” and “Whites only” were recently legal and commonly headlined in rental, house sales, and job ads everywhere.

In those days, three testers were needed: a ‘husband and wife’ and a witness. One group was white, the other black with identical backgrounds of family, income, and jobs, so the only difference tested was color.  Not only was the anger and shock of white landlords blatantly obvious when caught, but my dad and his ‘wife’ and witness were once held at gunpoint in one large apartment building when the manager realized he was being tested (and had failed). Fortunately, my dad talked him out of harming anyone as the crime of racism was bad enough much less taking hostages.

You might be surprised to know that Archie Bunker (Carroll O’Connor) of All in the Family fame was a leader in the fair housing movement. He and the cast took time off from filming to lend their celebrity to the effort. My parents told me that Carroll O’Connor once told them: “I play a bigot so well because I hate them so much.”

My parents continued their good trouble by protesting the horrific Vietnam war and later advocating for same-sex marriage rights. I, in turn, become a fair housing tester in the Baltimore area and my parents provided me with a deep sense of justice.

When I inherited some money from my parents’ passing, I used it to buy one of the largest undeveloped parcels in Baltimore City to create an urban farm and tiny home community.

I spent three years bashing my head against the wall with city officials while attempting to get a small pilot tiny home community established to no avail. I planned on creating an in-your-face occupy-styled settlement including two attorneys who were ready to sue the city for violating my landowner and their housing rights if we were stopped. However, I quickly pivoted to a more positive role in facilitating Atyia Wells, a local homeowner and pediatric nurse in farming the property. After three years of amazing work in bringing the farm alive,  I donated it to BLISS Meadows last year. I consider this my own small effort towards reparations.

The impact has been extraordinary including summer camps. goats, chickens, fruit trees, raptors and birding, bees, educational workshops, and food giveaways. My mom’s money was the pebble that created a ripple that continues to grow. Children and adults learn and participate together in making a real community farm that is in the city, in which they feel ownership, and not some far-away place owned by others.

Just recently, I remembered a movie I saw with my wife Renee years ago: “ I AM”. It’s about a director’s journey, Tom Shadyac’s (who directed Ace Ventura and Liar Liar) own discovery in asking what’s wrong with the world and what can we do about it.

Find the helpers, the doers of good deeds, and join them. Be that pebble that makes ripples towards equal rights and justice for all. I am – are you?