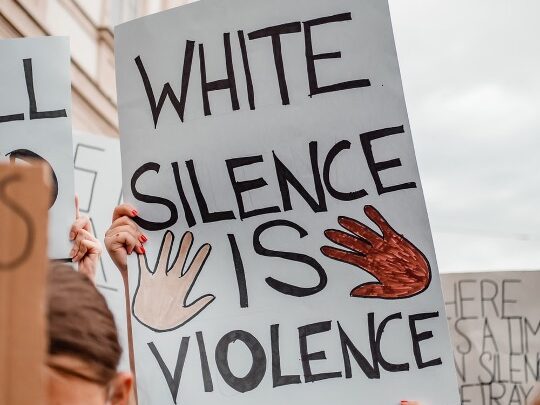 Photo by Simone Fischer from unsplash.com

Editor’s Note: This is the second in a two-part series by Adar Ayira, Last week Adar explored the connection between faith and justice. This week she invites us all to pay attention to the history and sustained presence of racism and attitudes and actions needed for change.

“We hold these truths to be self-evident, that all men are created equal, that they are endowed by their Creator with certain unalienable Rights, that among these are Life, Liberty and the pursuit of Happiness.”

“We think [people of African ancestry] are not, and that they are not included, and were not intended to be included, under the word “citizens” in the Constitution, and can therefore claim none of the rights and privileges which that instrument provides for and secures to citizens of the United States…”

The practice of racism and white supremacy in the United States, from conception, has always been structural and institutional. The majority of U.S. history has been one of policies and legislation codifying the advancement of those classified as white and legally denying opportunities for those groups that were not.

Despite these truths, America continues to advance the narrative of the episodic racism of individuals rather than the historical truth that the nation was conceived and spent the majority of its legal history as a white supremacist nation. Americans attempt to “both sides” the issue by acknowledging the structural racism of “the past” while focusing on “progress.” They uplift episodic symbols of progress while decrying the statistical inequities of racialized, structural oppression.  This distinction creates a narrative that prioritizes white comfort over truth.

The expectation of white comfort in conversations about racism is a whiteness practice; it is part of white supremacy culture. Dr. Tema Okun, in her guide “Identifying and Addressing Characteristics of White Supremacy Culture,” describes white supremacy culture as being “…used as norms and standards without being proactively named or chosen by the group…they promote white supremacy thinking…these attitudes and behaviors can show up in any group or organization.”

It also enables white participants to retain control and power in deciding whether and how they engage, or not.

To be anti-racist is to live in a state of having comfort disturbed. It is to stay in a state of learning about the true history of the U.S. and to realize that personal hurts and family histories are not the same as generations of structural oppression. It is knowing that U.S. anti-Blackness is a core component of racism and white supremacy that makes the experience of racial oppression of Black people in the U.S. different from any other racial group.

To move away from whiteness practices is to stop expecting “healing” and “reconciliation” while the evils of racism and white supremacy are still part of U.S. life in ways that are life and death for Black and some non-Black people of color groups.

To move away from whiteness practices is to reject centering the comfort of white people and instead to actively work on behalf of the dismantling of racism and white supremacy.

To move away from whiteness practices is to fight as for a loved one against regressive policies and practices that negatively and disproportionately impact Black people and non-Black people of color.

To move away from whiteness practices is to be humble.  It is to own the complicity and responsibility that comes with the group privileges and experiences of being racialized as white in the U.S. instead of running away from it (for example, by only acknowledging an individual identity that allows statements such as “not all white people” while downplaying the racialized group identity which seeds an expanded array of opportunities, access, and comfort to and for white people as a group).

It is easy to talk about being anti-racist.  But to actively be anti-racist is hard work.

And it is the work that is needed for everyone to be free.