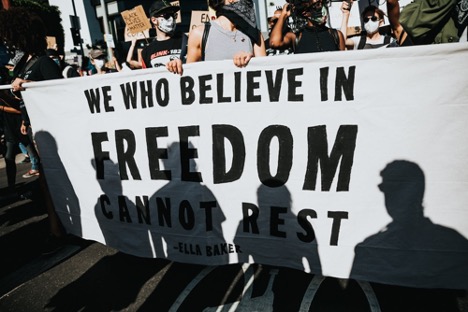 Photo by Nathan Dumlao from Unsplash.com.

This week we are continuing to explore the many ways to advance racial equity and justice.  I have invited a colleague and friend, Bob Francis, to share the kind of discussions and actions he is taking and seeing others take to advance deeper and lasting change in America. Bob is the retired executive of a regional youth-serving organization in Connecticut. He began this work as a civil rights activist in the 60’s and is a life-long advocate for change.

Bob offers us three concrete examples of ways to engage locally and nationally for change. As the trial of those involved in the murder of George Floyd is underway, we are reminded that working for racial equity is a life-time commitment with lots of opportunities to work for change.

Like Tom, I am an older white guy. I have spent over 40 years working in the juvenile justice, youth development and child welfare systems. During that time, the single issue that consumed my work is the debilitating effect that both explicit and implicit bias has on young people of color: economic and educational disparity; mass incarceration based on low-level drug crimes; police brutality; detention for youth of color where their white counterparts would be taken home to their parents; laws that by their nature were established to keep Black youth and adults “in their place”; and over the past four years, an increased chasm between many people of color and white groups.

I have come to think of my life as being both working to change policies that result in racial inequities and disparities and advocating for groups and institutions to find ways to reduce polarization among people with different perspectives. What follows briefly describes both the discussions and actions in three organizations with which I am involved.

Let’s look first at my experience with the Asset Based Community Development Institute (ABCDI). ABCDI is a national organization dedicated to building communities from the inside out. Rather than depending on institutions to solve our problems in a community, ABCDI relies on mobilizing the gifts and talents of the people who live in the community. John McKnight, our founder, has formed a group of ABCDI practitioners internationally to discover where ABCDI practices of inclusion, grassroots organizing emanating from the gifts of all our citizens and a commitment to racial equity can have an impact on identifying the roots of a chasm and then reduce the divides among various groups. At the bottom of this chasm, lies racial discrimination – the belief on the part of many that people of color are taking over and they don’t deserve to.

On the policy front, within the last year, ABCDI has adopted a policy of including attention to the history of racial and ethnic disparity in America in all of our training and workshops. As a white trainer, I am reminded regularly that the painful part of American history which resulted in laws and policies that benefitted white people and harmed Black people was not part of most white people’s history lessons. As we work to accentuate how the people and histories of communities are their assets, we also are drawing attention to the lack of fairness in the opportunities.

One example of how this policy shift led to discussion and action through our training is in Rancho Cordova, a mixed-race suburb of Sacramento California. Ron Dwyer-Voss, one of our ABCDI organizers, addressed the issue of race and equity in a growing monolingual Mexican American neighborhood. Through engaging young people from the school, he identified what young people wanted for their community and what they thought their families and leaders should do to make it so. Through numerous listening sessions with youth, parents and community leaders in law enforcement and government, the city committed resources for a youth soccer league, a community festival highlighting the gifts of the residents, changes in law enforcement toward true community policing and getting the slumlords to paint and upgrade the public housing units – all of this engagement resulting in a 75% reduction in violent crime in the neighborhood. The city committed these resources based on several conditions – that the residents of the neighborhood use all their assets and serve as coaches for the soccer teams, staff all of the stations for the festival, join citizen’s councils for public safety, assist the police as they walked the community and contribute their sweat equity to improve the housing.

The second area where I’m involved in reducing racial and ethnic disparity is with the Connecticut Juvenile Justice Policy Oversight Committee. Through the state legislature, we are working to place a race and equity impact lens on every state law, public policy, and state and local practice to raise awareness of and reduce the resulting inequities.

Over the last five years, our prison population has gone from a high of 17,000 in 2015 to less than 9,000 today; a large juvenile prison facility housing 250 young people has been closed and replaced with smaller community-based facilities populated by fewer than 60 young people statewide; police are being removed from some urban schools greatly reducing the number of student arrests, out of school suspensions and expulsions of young people of color; and efforts are being made to equalize the resources available between urban and suburban school districts.

Finally, I am part of a local men’s group of people like me who are white, either retired or in transition to retirement and eager to continue to work for change. Group members come from business, ministry, education and nonprofit organizations and have a large variety of experiences and political leanings. What we have in common is a belief in the importance of the spiritual in our conversations and community change work. Some of us practice a particular faith; others don’t. Yet we intentionally talk about topics such as hope, giving and receiving a helping hand and grace and what they mean to each of us. Despite different beliefs, we find at a deeper level there is a faith that inspires us all to want to stretch and look for the common good. For some of us, the group is what inspired us to address racial equity and polarization.

There is much that remains undone. Connecticut is not unique. What is happening here is occurring throughout our country. It is happening internationally as well with strong national commissions in Canada and Australia examining and trying to correct the disparity and treatment of indigenous populations. There is no excuse for indifference. Each one of us has something to offer and can make a difference if we just decide to get engaged.  Our efforts need to be ongoing and people must be committed for the long term and not just begin and end with Black history month.  Let’s make it so.