Lois Wilson: A Leader to Learn From 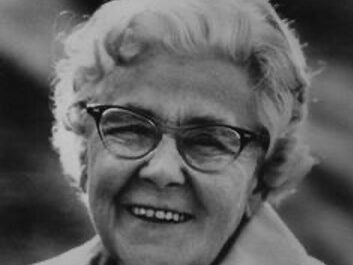 My post last Tuesday explored the contribution of Anne Smith to the Twelve Step programs. Her marriage to Dr. Bob Smith, co-founder of Alcoholics Anonymous, gave her a front-row seat in America’s struggle to find help for people dying from alcohol addiction. (Subsequently, I learned that Anne’s birthday is incorrectly reported in some of the A.A. literature. Her correct birthday, validated by her birth certificate, is March 21, 1881. Apologies for the mistake.)

This week I want to honor Lois Wilson and her role supporting the birth and growth of A.A. and Al-Anon.

Lois was married to Bill Wilson, the co-founder of Alcoholics Anonymous with Dr. Bob Smith. Just as Bill and Dr. Bob played different roles in the forming and early development of A.A., Lois Wilson and Anne Smith also led in different ways and had separate roles.

Lois was born March 4, 1891, into a well-heeled New York family from Brooklyn. Anne was born in Oak Park, Illinois, of middle-class parents and attended Wellesley College on a scholarship.

While Anne was quiet and known for her welcome and quiet service to hundreds of wives of alcoholics, Lois was more outgoing. She was the social glue who kept the couples together who went on to become the early A.A. members and spouses. Lois studied occupational therapy, had a number of jobs to support herself and Bill, and enjoyed creative activities – gardening, interior decorating and writing among them. Once she and Bill finally had a home of their own in Westchester County, New York (in the town of Katonah), Lois looked forward to some “Lois-time.”

Prior to that, Lois had spent the first 17 years of her life adjusting to and later trying to stop Bill’s out-of-control drinking. From his sobriety in 1935 up until 1941, Lois ran what was, in effect, a half-way house for men who Bill was trying to help get sober.  When they lost that home because they were unable to keep up with the mortgage, they moved from home to home for three years until they purchased their own home in 1941.  That home is now operated as a museum and holds memorabilia and archives of writings by the Stepping Stones Foundation.

Anyone who knows the story of Bill and Lois, or for that matter the story of any couple or family torn apart by the destruction of too much drinking by a loved one, can relate to Lois’ exhaustion and desire for a time out.

But Lois Wilson did not rest. After supporting Bill through the tumultuous first 16 years of A.A. development, she devoted herself to both supporting the early growth of A.A. and in 1951, the launch of Al-Anon. She continued this work until her death in 1988 at the age of 97. A part of Lois’ legacy, Al-Anon celebrates its 70th anniversary this May.

There are many lessons for America and our world from Lois’ leadership and contribution to a better world for women, spouses and families of people with addiction problems.

What follows is an Opinion Essay I wrote that depicts those lessons.  It was published by the Baltimore Sun in celebration of Lois’ birthday. Follow the link to learn more about Lois Wilson and her amazing legacy and the lessons that we might apply to America’s current crisis of trust.

Lois Wilson: Lessons for today from an early woman activist

If we were paying attention, we learned a lot in February about little-known Black leaders who are part of the long chain in the fight for freedom and equity. In the women’s movement, there is a similar chain of little-known leaders who have and are building the bridge to women’s equality. One of them is Lois Wilson, whose birthday we celebrate on March 4.

Lois Wilson empowered millions of women and offered each a path out of the toxic, life-threatening relationship. She and her husband Bill, along with many others, built a movement that is the largest and most successful self-help movement in the world.

Given such an amazing contribution, why don’t we know much about Lois Wilson? While that is an interesting question, an even more important one is what might we learn from Lois and the movement she helped lead about our way out of our current national leadership and trust crisis.

To continue reading, follow the link to the Baltimore Sun op ed.

This article appeared last Thursday, March 4, as part of the blog post of Recovery Speakers. The Baltimore Sun article above was available electronically on March 3 and in the print edition of the Baltimore Sun on March 4.