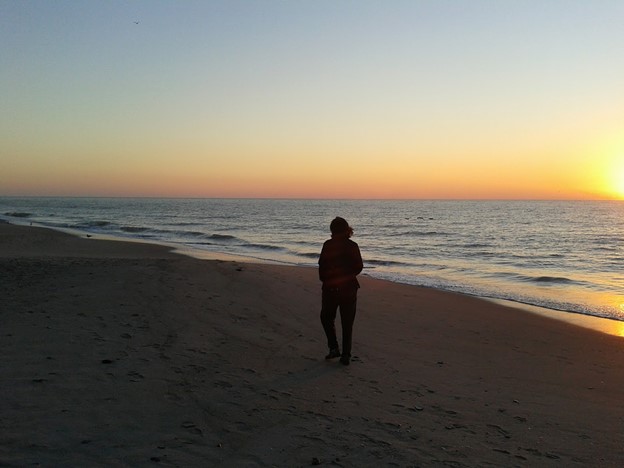 Editor’s Note: This week we continue our exploration of the many manifestations of love with Guest Contributor Don Perkinson. Don is a neighbor and he and I are members of a weekly meditation group here in Greenbelt.

Kathy died. I knew she was going to.  I had known for almost a week.  She had suffered a series of strokes over her last month. The last was a major brain bleed that killed her brain.  Over the course of that week, she lost all brain function and eventually died. I knew she was going to die, and I surprised myself at how calm I was during that week. It wasn’t until she died that I came apart. Somehow, as long as she was alive I knew I would be as strong as I could.

She died on July 10, 2020.  My story is about my grief. As strong as I was while she was alive, I became that weak after.  I cried like I had never cried before.  I felt as helpless and lost as I had ever known.  I carried on outside of home.  Friends were wonderful and I was able to be with them and was grateful for them.  I still am.  But nobody knew the pain and agony that followed me home.  I didn’t sleep.  I couldn’t sleep for more than two hours at a time and it wasn’t unusual to wake up and find that I had been crying while asleep.

Grief is something I never knew.  I knew about it.  I had seen people go through it. But I didn’t know it.  In the five years before Kathy died, my mother died, my sister-in-law died, and just 10 months before Kathy died, my father died. Each of those was painful, but none carried the grief of losing Kathy.  We had been married for 34 years and dated for four years before that.  I met her in group therapy. She was going through a bad marriage and I was struggling to find my way in the world. After we had both left the group, one night we showed up at the same party unattached. I had always been attracted to her, and now was an opportunity to get to know her outside of the group.

Since she’s been gone, besides friends, I’ve had a prayer group, therapist, and a spiritual director walk this road with me.  I’ve also been on retreats. Earlier this year I took a trip with Shalem Institute for Spiritual Formation to Assisi, Italy to follow in the paths of St. Francis and St. Clare. This past weekend I went to a one-day retreat on grief at Bon Secours in Marriotsville, Md.  Yesterday morning, when I awoke I reflected on that retreat and wrote the following reflection.

This morning as I lay in bed I was in no hurry to get up.  Instead, I just let my mind go where it wanted for a while. I wasn’t worried, I wasn’t even particularly sad. I was just comfortable and peaceful lying there.

I remembered the guided meditation my group had taken last Saturday led by the leader of a retreat on grief.  In the meditation, our minds were taken on an elevator ride down 10 floors, to an outside door leading to a beach.  We were instructed to walk to the water’s edge and begin to walk down the beach.  As we were walking we met up with the person we were grieving.  After a while, we were led to a sand dune and asked to sit quietly together.

Today, I tried to reconstruct the meditation on my own.  A friend had asked if that were possible.  So I tried.  In my mind, all of the steps from before were repeated almost exactly as I remembered them. But when we got to the sand dune, things changed.  Before, I had seen Kathy so clearly. I could hear her voice, touch her skin.  I even saw the little freckle beneath her right eye that made its appearance each summer as her skin tanned. I don’t recall what was said, but I could hear and recognized the sound of her voice.

As we sat together this morning, again I could see her clearly. I could feel her skin, and still see that little freckle. I told her how much I loved her, and how much I missed her.  In a voice I so clearly remember, to my surprise she didn’t tell me she missed me. Instead, she told me she was still here.  She said, “I live in your heart and am always here, always with you”.  She said she also lives in our son John’s heart and is always there as well.  She told me to not be sad, but to live my life, to enjoy it, to follow my heart, my dreams, my talents.  She said, “I will help you.  I know how. “

I still miss her.  I know I always will.  But I also know she is with me in all that I am, and all that I do.  When we married, we married for life. Both of our lives.

Seeing and Seeking the Beloved Community

Slowing death and the Wilsons – What’s the connection?

Dr. King’s faith and its meaning for us