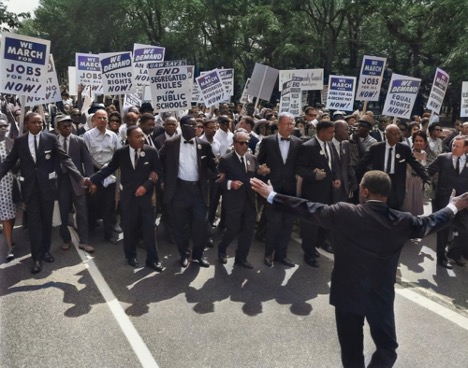 Editor’s Note: As we remember the faith and courage of Martin Luther King Jr., guest contributor Fr. Joe Muth reminds us of the challenge of finding our individual voices and the need to work collectively for more racially just and equitable communities. Fr. Joe is a friend and classmate who has dedicated his work as a priest in serving neighborhoods in Baltimore where people of color from numerous nations face racism and discrimination. Fr. Joe is co-founder of the Immigration Outreach Services Center in Baltimore.

Faith is a terribly challenging experience if you take it seriously. It can truly mess up your life. You find yourself picking up the Bible and trying once again to figure out what Jesus meant by his words and actions. Some of them seem so simple and direct. Others seem to put you at risk in standing up for the marginalized and the poor. You know that if you do so it will change relationships. You are challenged to become like a John the Baptist figure and find your voice to speak. John was a “voice crying out in the wilderness!” Many times, that’s where we find ourselves. In church work and on the political scene we are often in some kind of wilderness trying to cry out and hoping someone hears. Finding your voice, whether it is in the spoken word or the written word or in some kind of action, can be a scary thing. You expose yourself for what you believe is important, and for what you believe is being neglected.

Finding Our Voice – In June of 1963, Rabbi Abraham Joshua Heschel was invited to the White House. It was two months before the March on Washington, and President Kennedy was hoping to avert the situation. Rabbi Heschel wrote, “I look forward to the privilege of being at the meeting tomorrow at 4 p.m. The likelihood exists that the Negro problem will be like the weather. Everybody talks about it but nobody does anything about it. Please demand of religious leaders’ personal involvement not just solemn declaration. We forfeit the right to worship God as long as we continue to humiliate Negroes. Churches and synagogues have failed. They must repent. Ask of religious leaders to call for National Repentance and Personal Sacrifice. Let Religious Leaders donate one month’s salary toward a fund for Negro housing and education. I propose that you, Mr. President, declare a state of Moral emergency. A Marshall Plan for aid to Negroes is becoming a necessity. The hour calls for Moral Grandeur and Spiritual Audacity.”

There was no national call for a moral emergency or a request for a donated fund. What does it take to find our voices?

Finding Our Voices – Dr. Martin Luther King Jr.’s Letter from a Birmingham jail was written in April 1963. In May 1963, policemen, firemen and police dogs were unleashed on young people in Kelly Ingram Park in Birmingham, Alabama, in a peaceful demonstration; Medgar Evers was assassinated in June 1963, the March on Washington was in August 1963; the four girls killed in the 16th Street Baptist Church bombing was in September 1963, and President Kennedy was assassinated in November 1963. What does it take to find our voices?

Many of these actions were led by, developed by, encouraged by and mourned by people of faith, because faith is a part of our emotional, spiritual and political lives. The struggle for a just society cannot take place without faith playing a part.

Many people in scripture acted because of a dream they had where God spoke to them; or because a messenger from God was sent to them. I have not had either of these experiences personally. But I have met many faith-dreamers, and I have met many people with a message of hope. They have all encouraged me to stay the course and deepen my own faith and continue to stand with the marginalized. In this regard, I am still trying to find my voice. How might our collective voices make our communities more just now?