Faith and Racial Justice: A Perspective 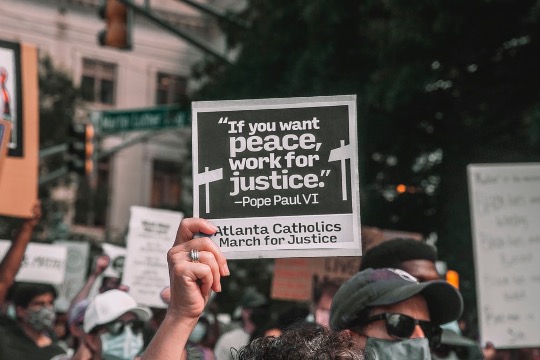 Photo by Maria Oswalt from unsplash.com

Editor’s Note: Our guest contributor this week is Adar Ayira, a colleague and friend from Baltimore and a self-described Anti-Racism/Anti-Oppression educator, facilitator and trainer. Adar invites all of us to look deeper at our beliefs and actions to end racism.

In 2020, many white faith-based, as well as white secular, communities discovered – with the death of George Floyd — that racism still existed and operated with severity and impunity.

White people began to read more books on how to be anti-racist; began to have “honest conversations” within groups or with “Black friends”; began to prioritize “allyship” as an action; began to try to understand that white supremacy is not just about individuals in extremist groups but operates on institutional and structural levels; and began to connect with the fact that although some “good white people” would not personally support racism, there are many for whom racism is not a dealbreaker.

Now, however, a little less than two years after George Floyd’s murder by police, that moment is over.

I do not mean that white people have stopped one or all these things, only that it does not seem as urgent anymore.  Currently, we face the truncating of access and opportunity for Black people exercising their voting rights; “blacklash” against teaching the documented history of the United States instead of mythology and propaganda; the packing of federal judiciary courts by one political party; and legislation obliterating important rights of women and LGBTQIA individuals.  Each of these has racially disproportionate impacts. None of these receives the 24/7 attention given to those fighting to retain democracy overseas.

It is like democracy in the U.S. is not being imperiled at all.

Or maybe it is just that democracy is not being imperiled with a negative and racially disproportionate impact on white people as a racial group. If it were, would white people – especially those who self-identify as people of faith and/or people who love justice – be willing to “walk the walk” by increasing their own level of risk and sacrifice such as that which Black and non-Black people of color take every day?

In my 30+ years as an Anti-Racism/Anti-Oppression (ARAO) educator, facilitator, and trainer and as a member of a vast multi-racial network of the same, I have found that people who do ARAO work as a life-long pursuit do so because of two primary motivators:  Faith and Justice.

Faith can take many different shapes. Although some individuals are motivated by a religious Faith, others are by a Faith in service, still others by a Faith in people. And still, other ARAO practitioners are motivated by their abiding faith in the concept of Justice; that the U.S. can truly be what it has always claimed to be if only Justice would prevail and would equally apply to all, as the U.S. has always claimed.

In ARAO communities, we talk about how both Faith and Justice have been perverted to maintain white supremacy. We talk about how to break down the barriers that are created to advantage white people and disadvantage everybody else. We discuss whiteness practices: the propensity to focus on and over-estimate “progress”; the eagerness to hear personal stories of people of color while ignoring or downplaying the institutional and structural; the mistake of equating listening to personal stories with action and advocacy.

Our conversations are honest reflections that go beyond fellowshipping with Faith-members of color where there might be more focus on “understanding each other” and “healing and reconciliation” than on how people will take risks and use their privilege to help dismantle white supremacy in our institutions. For instance, in our faith-based institutions images of God and Jesus historically have been propagandized as a biblically inaccurate blond-haired, blue-eyed white man. This image usually shows up in our mind’s eye in the same way.  Much of our work is the internal work of decolonizing our own minds.

Racial Justice is a hard road to travel, yet there are people of all races who believe in Faith and Justice and who continue to work for Racial Justice.

This journey of actively working toward Racial Justice is, for me, an act of Faith. It is an acknowledgment of whose I am: both God’s and those Ancestors whose lives and deaths bought and paid for the limited (comparable to white people) privileges I have. And like the people to whom Jesus was born, my Ancestors paid for these limited privileges in blood, generation after generation, in a country supposedly built upon “freedom and justice for all” where they were oppressed and persecuted.  Especially during this holy time after Easter I am reminded of the debt of Love, Gratitude and Obligation that I carry in this work — not just to past generations, nor to the next ones, but to how I walk in Faith and Justice.