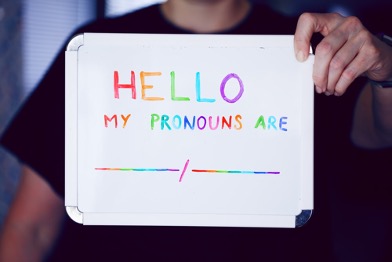 Photo by Sharon McCutcheon from unsplash.com

Editor’s Note: Our guest contributor this week, Hilary Howes, is a neighbor in Greenbelt and an activist. Hilary shares her passion for work with the LGBTQ community and describes how her faith led her to this justice work.

I was not born a Catholic. I was raised with no religious tradition and I didn’t get baptized into the Catholic faith until I was 48. I was born with a female gender identity but because I was identified male at birth. I didn’t come to live as a woman until I was 40. So resurrection, transfiguration and epiphany (the revealing of that which has always been true) were part of my lived experience before I began to understand those words in a faith tradition experience.

At 45, I started attending a Roman Catholic Intentional Eucharistic Community that serves as an alternative to parish life. One difference in their Mass is that there is a ‘shared homily’ where, after the priest has his say about the meaning of the readings, anyone else attending is invited to have their say as well. This weekly ‘first person’ theology broke open the Bible and faith for me in a way that I could never access before. It had always seemed too lofty, too long ago and far away to ever have meaning for me. But with my emotional access provided by having my brain working with female hormones and by having the gospel in the words of everyday beings, I connected with the timeless lessons of the bible and came to live it more and more.

While I was in my transition, I started to teach at workshops for students, teachers, psychiatrists and social workers to better understand trans people in what we have come to call Gender 101 classes. Before the internet, it was almost our only vehicle to promote understanding and the movement for healthcare, equality and dignity under the law for trans persons. The very first time I put on a dress, it was a crime. Think about that. We have come a long way and it is humbling to think that I may have some small part in that.

My community includes incredible social activists. They inspire me weekly as they share their homilies. Once I was baptized, I realized the need for a place on the web that told a positive faith story of transgender Catholics to counteract a culture war raging on the web that had left conservative “Catholics” on one side and “Transgenders” on the other. I endeavored with TransCatholic.org to create a Roman Catholic apostolate to support the dignity and inclusion of transgender laity. My original goal was to reach trans people who were Catholic to give them some solace. But I have found that most trans Catholics have been so harmed by the church that they had left, never to return. I found that more traffic was coming to the site from Catholic family and friends of trans people who genuinely wanted to understand from a faith perspective how they could be supportive. Then I started hearing from Catholic school teachers, administrators and parishes asking how they could be better allies to our marginalized community. Catholic social teaching is clear that we need to embrace and center the marginalized as being central to our goal to walk the path of Jesus. Surprisingly, A Williams Institute survey found Catholics to be the most supportive of transgender equality of all the mainline religions.

Exploring this intersection of religion and gender has given me amazing opportunities to write, speak, broadcast, teach and interact with theologians, church leaders and teachers. These wonderful interactions have given me a deeper understanding of myself, my faith and the struggle to transform society and the Church itself. In my ongoing quest to follow Jesus, I have often been reminded that he was asking his church to be better, just like I am in asking my hierarchy to support the dignity and inclusion of transgender people.

For more on this and related topics, visit Hilary’s website at TransCatholic.org and New Ways Ministry.