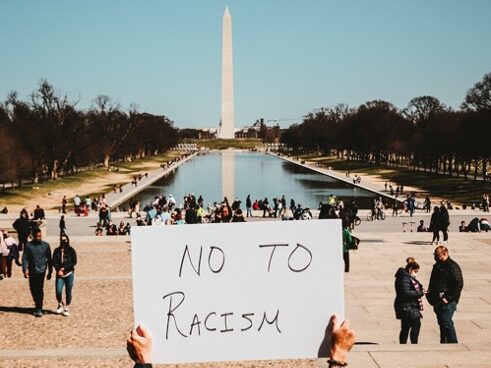 Photo by Viviana Rishe from Unsplash.com

America is in denial about its “war” on racism. Only one side is truly engaged – the white supremacists.  They are organized and committed to winning at all costs. If those of us who want to end racism are serious, we have an imperative to organize, fight, and not stop until we are victorious. We need the commitment of a warrior and the heart of a nonviolent revolutionary.

George Floyd was murdered in Minnesota on May 25, 2020, two years from tomorrow. Young and old of all races and ethnic groups took to the streets, organized and said, “No more.” Black Lives Matter. Now, this energy has dissipated.

My wife and I were recently in France for a family wedding. Spending time in Europe reminded me of some of the obvious lessons that history teaches us. While I believe war perpetuates more wars and is not a solution, there are some lessons we can learn from the many wars over the centuries.

We spent a couple of days in Normandy and picked up a short booklet titled “D DAY and the Battle of Normandy.  June 6, 1944, is pointed to as Liberation Day and the restoration of freedom and world order. The planning for D-Day success began in 1940 and took four years and was the largest commitment of people and resources in history. Five thousand naval vessels and two thousand additional support vessels were assembled days before the invasion. They were joined by 37 Divisions on British soil joined by 50 Divisions arriving direct from the United States and an air force comprising 10,000 planes.

To assemble and lead the largest invading force in history required an unprecedented surrender of egos, national identity and pride against a common enemy. There was an unshakeable commitment to win as the cost of losing seemed too high.

Clearly, the combination of will and commitment can be combined to achieve previously impossible goals. The decision to send a “man” to the moon is an example. Visit the National Air and Space Museum at the Smithsonian Institute in Washington DC and you will see a display with the multi-decade timeline and steps required to get to the moon. There was a commitment, a will to not fail, and significant resources committed.

More recently, the United States found the will and the money to advance several substantive initiatives. When Barack Obama was elected President in 2008, the US was in a deep recession. Billions of dollars were invested to save industries and to restart the economy. With the advent of Covid, billions of dollars were authorized to fight the pandemic. More than $40 billion has been committed to supporting the people and government of Ukraine in its fight against Russian oppression and genocide.

Where has the energy and leadership for change come from in the past? Again, a look to France and the recurring revolutions led by students, labor, and progressive thinkers resulted in repeated opposition to an oppressive monarchy and centralized power. The United States has seen the energy of young people, labor and coalitions of community and faith-based leaders come together for short periods to fight for change. Can that energy surface anew in America for a long-term campaign that actually ends racism?

Until we unleash the commitment of the American people to work to end racism and back up that commitment with substantial resources, our skirmishes for change will do little but ignite the fire in white supremacists. It is not enough to grieve the occasions of overt attacks on Blacks and people of color. It is time to step up our plans for a full-blown campaign to end racism.