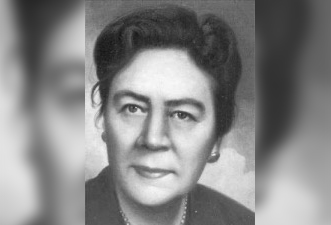 Hundreds of wives of men with drinking problems from all over the nation came to call her Anne S. or Annie. These women came to love Anne because of her enormous warm heart and the hope she gave to each of them personally. Each received the same warm welcome when she arrived at her home with her husband to find help for his drinking problem. “Welcome home, come on in.”

March 3 is Anne Smith’s birthday. May is the 70th anniversary of Al-Anon Family Groups, an organization she helped start, though she died before it was formally organized.  Every year on June 10, thousands of recovering alcoholics, many with their spouses or partners, travel to Akron for a weekend celebration of the founding of Alcoholics Anonymous through the collaboration of Anne’s husband Dr. Bob with Lois’s husband Bill Wilson.

As important as the founding of A.A. and this celebration is, it would not be possible without Anne Smith, Lois Wilson and the hundreds of wives who made it possible for their husbands to get help from other recovering alcoholics and a newfound Higher Power.

Anne Smith remains a largely unrecognized leader of freedom for women. Better known are her husband and the men who started Alcoholics Anonymous.

Yet, Anne Smith made three major contributions to addiction recovery that are at least equal to the contribution of her husband. First, Anne and others came to realize they were not responsible for their husbands’ drinking or recovery. By adapting the Twelve Steps of A.A. for families, Anne made clear to all that alcoholism and all addictions are community problems as well as individual ones.

No longer were spouses of people with drinking problems condemned to a life of despair, self-pity and community ridicule. Had all the wives of the early members of A.A. stayed angry and resentful of their husbands or divorced them, there would be no A.A. Most of the men would have continued to drink and gone crazy or died.

Anne knew firsthand about how families suffer when someone in the family is unable to control his or her drinking or another addiction. She watched as her life-style changed from the middle-class stability of a doctor’s family to not having enough money to pay the mortgage or buy food. Having both peanut butter and jelly or macaroni and cheese together was a big deal in the Smith household. Often it was peanut butter or macaroni.

Anne also knew first-hand the impact that untreated alcoholism has on other members of her family. She watched her son struggle with his drinking and marry a woman with a drinking problem. Tragically, she watched her adopted daughter Sue, who came from a family torn apart by addiction, marry an abusive, alcoholic husband. Besides the personal torment her daughter Sue experienced in the marriage, Sue’s own daughter suffered from mental illness and killed herself and her infant daughter.

Given these life experiences, it is not a surprise the Anne often retreated to a favorite chair in their Ardmore Avenue home in Akron to smoke, worry and pray for change. Anne’s faith allowed her to never give up on Bob or anyone who needed help. She joined her friend Henrietta Seiberling in becoming part of the Oxford Group, a 20th Century movement to follow the lifestyle of the early Christians.  Anne got Bob to go to the Oxford Group even though the prayers by themselves were not enough to get her husband sober at first.

Anne’s second major contribution was in sharing her religious faith with her husband and the Wilsons. Bill Wilson spent three months living with Anne and Bob Smith in the summer of 1935 when Dr. Bob was first getting sober. Lois Wilson visited her husband Bill and joined him and the Smiths in their daily morning quiet time and spiritual reading. This experience moved Bill Wilson, a skeptic to organized religion, to enlarge his own appreciation of the practices that advance spiritual growth.

Anne’s third major contribution was the one that seemed to come naturally to her. She opened her home to families who had the same problems her family had experienced. Her home became the first meeting place for A.A. in Akron. When there were too many people, they moved to King’s Church. Anne welcomed every spouse, mostly the wives in the early days. She introduced them to a spiritual way of life.

Anne Smith welcomed women from all over the Midwest. She passed on hope and the Twelve Steps to wives and families. Among her early friends was Dorothy Snyder, wife of Clarence Snyder who brought A.A. from Akron to Cleveland. Dorothy passed on what she learned from Anne. Anne Smith died June 1, 1949, two years before the formal founding of Al-Anon. By 1951, there were over 80 organized meetings of wives and spouses of people with drinking problems around the country. Anne Smith sowed the early seeds and provided the quiet leadership that made the growth of Al-Anon and the Twelve Step movement possible. Happy birthday, Anne!