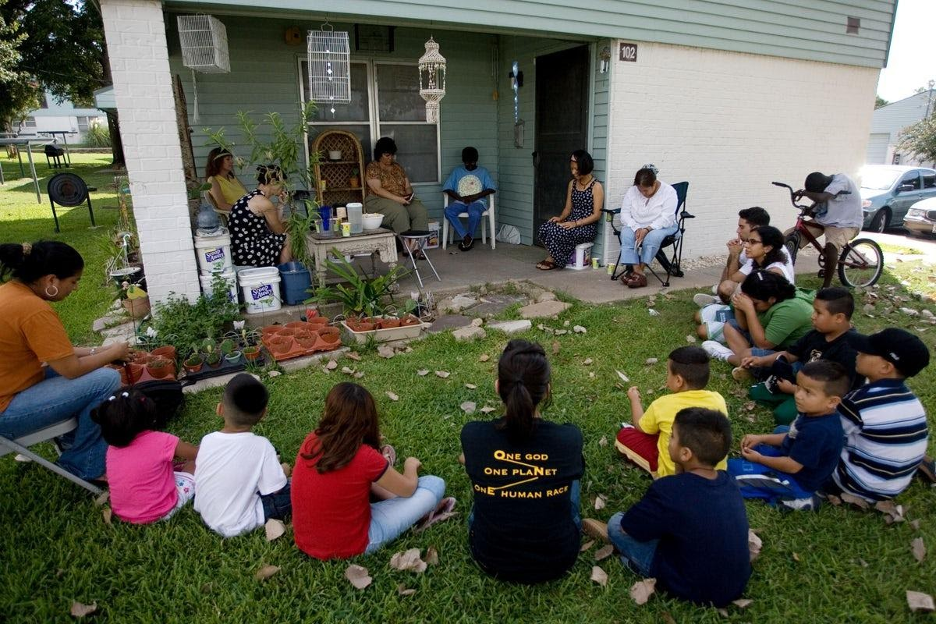 Editor’s Note: Our guest contributor today on faith is Farinaz Firouzi. Her faith journey began in her childhood growing up in Iran and needing to flee because of religious persecution. Surviving members of her family were taken in as refugees in Pakistan and Austria and came to live in Maryland with her aunt and African-American uncle. Ever since fleeing Iran where Bahá’í institutions are banned and being active leads to prison, she has participated in Baha’i activities intended to promote justice, the oneness of humanity and the appreciation of the strength and importance of our diversity. Far from an academic exercise, faith helped her heal from the trauma her family experienced and to grow personally and in her community work for justice. She deeply values the promise of her faith that the peoples of the world will learn to resolve their conflicts and establish a more just and peaceful society together, and cherishes the freedom to participate in activities she believes can help lay the groundwork for fulfilling that promise.

Last night I was up late. It could have been the cortado I’d had in the afternoon, but the recent headlines about Haiti, Afghanistan, relentless fires in California, the Delta variant, and all the forgotten ills still afflicting our human family abroad and at home could have also been contributing factors. It was two in the morning. I played song after song on the piano until eventually, melodies I had not played before began to fill the room. This is amazing, I thought. I imagined people who had passed on as inspiring the prayers my fingers were sending into the world from that out-of-tune instrument. And, like anyone would do at three in the morning, I began to wonder if there wasn’t some mystical meaning to the name “YAMAHA” in front of me. My exhaustion eventually pushed me off the bench and onto the couch.

I picked up my smartphone and started reading posts on LinkedIn. A video about conflict resolution reminded me of the course The Spiritual Heritage of the Human Race I had taken in college. Taught by the first designated Baha’i Chair for World Peace at the University of Maryland, the course was so popular other professors would frequently stand at the door to watch.

The captivating lectures of the late Professor Suheil Bushrui, the way he called us all by our last names, the life lessons that made their way into his animated anecdotes, the way he treated literally everyone he met with tremendous consideration and respect, the twinkle in his eyes, and the command he had of the room have never left me. He knew enough to have taught us about every religion himself. But he would not. He instructed that only those who espoused a particular faith would present on that topic to the class. If a religion was not represented, he invited a guest presenter from that Tradition. And, of course, even though a Bahá’í, he did not present on his own faith. Back then I thought I would learn more if I was asked to explore and present on a different faith. However, it wasn’t until a Baha’i Race Amity training a few years before the Black Lives Matter movement that the importance of not speaking for others and the transformative effect of listening really hit home.

Four hours into my reveries, I had finally made it to bed but couldn’t pull myself into a seated position. The clock turned 8:40 and my study circle was starting at nine. Recalling the Spiritual Heritage course, I reached out to Amy, a Buddhist friend, and invited her. She immediately responded and I rushed off to wash my face and start the Zoom meeting. My study circle is the foundational course of the Training Institute, a global enterprise undertaken by Baha’is and their neighbors to develop community life across every kind of social boundary and lay the groundwork for material, social and spiritual transformation at the level of the individual, the community and the institutions, all driven from the grassroots.

As I listened to the participants this morning share their perspectives on how the analogy of a baby in the womb applies to the development of the soul in this world (we are on the unit “Life after Death”) and what this means for how we are to conduct not just our lives, but also our business, our institutions, and our government, I thought about how enriching it was to witness and participate in such a dialogue. In the Zoom windows before me were a male Israeli Jew in Thailand, a female Iranian Baha’i living two miles from me, and Amy from a few houses down. Of course, I had forgotten to send my male Muslim participant in Pakistan the reminder this week. The male Iranian Atheist participant from several states to the north later said he got caught up playing ping-pong this morning and forgot.

I participated in my first study circle 25 years ago. Back then the Baha’i Community was just at the beginning of a cultural shift on multiple levels. I remember guidance from the international governing body of the Baha’i Faith, the Universal House of Justice, calling for a change from an inward-looking orientation to an outward-looking one in line with the Teachings. As community building (called “core”) activities became widespread, Baha’is around the world were gently guided to see everyone in their neighborhoods and villages as collaborators walking with them on their individual paths of service.

Decades later the concept of the protagonist who takes ownership for his or her own material, social and spiritual transformation and sees her own development and service to her society as inextricably linked has become firmly rooted in the Baha’i psyche. Amy’s participation this morning, the warm welcome she received and her request to be invited again next week reminded me of the image on the cover of the study circle workbook: a line of silhouetted people of different heights and features standing hand in hand, as another joins. Here is a line of solidarity rooted at the heart that cannot be broken by any natural or man-made crisis. I will sleep tonight.