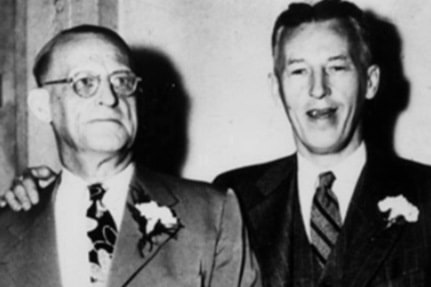 The founding moment for Alcoholics Anonymous (A.A.) happened on June 10, 1935. Recovering alcoholics and their families from all around the world are celebrating the unique and powerful personal and family transformations that are the result of this simple Twelve Step program. The power of A.A. and the Twelve Steps is now frequently applied to many other addictions. And the number of people grateful to Bill Wilson and Dr. Bob Smith for a chance meeting in Akron in June of 1935 continues to grow.

The co-founders of A.A. became unlikely friends and partners – Bill Wilson, a failed New York stock analyst and self-described big shot and Dr. Bob Smith, an Akron, Ohio proctologist whose family was surviving on macaroni and cheese and peanut butter because his drinking rendered them penniless.

The leaders of A.A. faced some similar regional and political differences that threaten our democracy today. Bill Wilson was from New York. That was enough to cause distrust among most of the Ohio followers of Dr. Bob Smith. And besides Bill worked on Wall Street and talked like a “know-it-all” New Yorker.

Dr. Bob Smith was a self-effacing Midwesterner. He didn’t like a lot of words. He is less well known than Bill Wilson because he said and wrote a lot less than Bill about A.A. They were both politically conservative. Bill was more of an idea and visionary and was not afraid of grand ideas and schemes. In fact, he needed a big idea to keep him engaged. Bob helped shape A.A. by his selective conversations with Bill beginning when Bill lived with him for three months and at critical decision points over the years.

Dr. Bob was the roll-up-his-sleeves, practical part of the duo. He saw immediately that part of the secret to A.A. recovery was working with others and trusting God in some way. He threw himself tirelessly into helping others with drinking problems for the fifteen years he lived after getting sober.

The partnership of Bill and Bob was threatened by the big differences in views between early members from New York and Akron. Bill and the New York members rebelled at the arrogance of the well-to-do New York members of the Oxford Group, an attempt to re-create the spirit of first-century Christianity. While initially finding benefits from attending Oxford meetings and following their spiritual disciplines, Bill quickly concluded that the Oxford approach in its entirety was too much for men trying to get off alcohol.

Bill seemed to know intuitively that A.A. could not grow with the handcuffs of the Oxford connection.  As a result, he and the early New York members left the Oxford group and started their own “seminars” which became A.A. meetings as known today.

This decision brought to a head the need for some structure or program to guide recovery. Bill and a handful of New York members traveled to Akron to discuss their ideas. Bill had three big ideas – write a book describing how men were recovering, open hospitals to dry men out and introduce the program and hire “missionaries” to bring new recruits into A.A.

The Midwesterners bristled at these suggestions and thought they were unnecessary. Dr. Bob’s leadership is the only reason there was not a schism from the start. His trust in Bill resulted in an agreement to write the book. But the Akron men were clear they were not contributing to its cost. The big shot New Yorkers could find the money.

The next fight was over God and faith. Some of the New Yorkers were atheist or concerned the talk of God would lose members. Dr. Bob and the Midwesterners didn’t see this problem. Again, Bill and Bob and other early members worked through this potential deal-breaker. By listening to each other and letting go of either/or thinking, they found a new ground that was not a compromise but a wider tent for all. They concluded that each member could have the freedom to decide who God is for them and, if they don’t believe in God, what Higher Power will guide their recovery.

America’s crisis of leadership and consensus-building would benefit from a study of Bill Wilson and Dr. Bob and the history of how A.A. worked through their differences. People from different regions, cities, and neighborhoods don’t trust one another. One person’s religion isn’t accepted by others. There is no collaboration. Today, religion, regional differences and beliefs about the balance of independence and interdependence block any progress on gun violence and abortion. And these same differences make facing our national history of racism and becoming an anti-racist country a leap of faith, many consider too enormous to be confronted.

Dr. Bob and Bill Wilson faced similar roadblocks. Yet, they found a way forward through the development of A.A.’s Twelve Steps and Twelve Traditions. With their wives, who were deeply involved in the start of A.A. and its sister program for families Al-Anon, The Wilsons and Smiths and the other early members offer a blueprint for a way forward.

Happy birthday A.A. May your lessons help guide America out of this transition period of obstinate holding on to old ideas and ways of doing things. They aren’t working just like they didn’t work for those trying to get sober. Change is possible – look at the A.A story.

Tom Adams writes on recovery, spirituality and racial justice topics and is the author of a weekly blog Critical Conversations at thadams.com. He is co-author of the forthcoming book Bill and Lois Wilson: A Marriage that Changed the World.