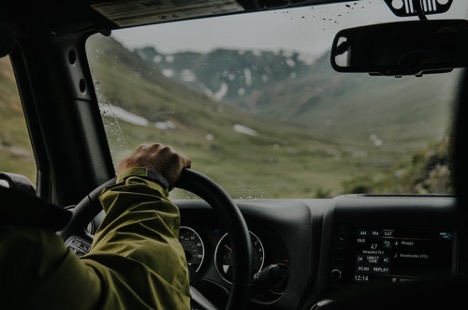 Photo by Morgan Rovang from unsplash.com.

The last few weeks I have reflected on noticing and its power. Today I’d like to continue that theme in the context of traveling. This past weekend Geraldine and I drove to the mountains of Georgia on the South Carolina border for a family wedding. If you like details, google “Clayton, Georgia,” “Tiger, Georgia,” and “Long Creek, South Carolina.”  It is a beautiful part of the world, in the foothills of the Appalachian Mountains.

If you live and spend most of your time in urban areas, as I do, there is a lot to observe in the mountains. First, I have never put an address in Google maps at home and ended up on a road with one hairpin turn after another which eventually leads to a dirt road for five or six miles and then back to pavement and more hills and curves. You don’t go anywhere real fast and, if you do, it is at your own peril as we experienced when a speeding car came around one of these curves and into our lane, requiring a quick move to an almost non-existent shoulder.

The gap between the poor and the wealthy is as apparent in rural areas as it is in urban areas. People of means build large, gorgeous view 2nd homes next to one- or two-bedroom homes in need of a lot of basic repairs.

Growing up outside of Baltimore in a working/middle-class family, we learned about the “hillbillies” who lived back on dirt roads out in the country. We were told they were different from us and less than us. Sadly, these deeply embedded stereotypes die slowly. I could watch myself making judgments about people and their social status as I went in and out of gas stations, welcome centers and restrooms.

The twelve-hour drive from Maryland to South Carolina also made clear that Robert E Lee and the adoration of him has not died. We drove on several major roads in different states with signs “Robert E Lee” Highway. As I drove on these roads, I found myself appreciating more deeply the raging battle over removing statues and tributes to Civil War heroes. I reflected on how offensive these memorials are to Black people who endured generations of slavery and are a long way from full freedom. I can imagine being outraged and scared to live in a community that still considers the protectors of slavery heroes. What form will the “lynchings” take now? Is there really safety for Blacks in a community committed to glorifying the Civil War and its legacy?

At the same time, I found myself having compassion for a huge part of our country that has been seen by Northerners as inferior for generations. Yes, the Civil War was about slavery and its future. Yes, there is no justification for slavery or fighting to protect it. Yet is it possible that some holding on to this difficult past are holding on to family roots different than slavery? It is indeed difficult to understand this, yet there seems to be some possibility of tolerating the holding on to the past while not accepting the unacceptable part.

As we passed from one county to another, my mind flashed to recent election nights and watching Steve Kornacki of MSNBC dissect the vote in Georgia. Traveling through the rural counties that are part of deciding for which party and set of beliefs Georgia will vote, I gained some appreciation for the disconnect between rural voters and urban-based candidates.

If you look at the state of Virginia on a map, it looks fairly small, particularly if you lived all your life in Maryland and considered Maryland superior. But if you drive RT 66 out of the Washington/Maryland suburbs and get on I-81, you experience the scale and complexity of over 300 miles of Virginia.

I am always fascinated by how a candidate for a statewide office in any state puts together a winning coalition. In Virginia, the socioeconomic differences between the densely populated Washington suburbs of Arlington and Fairfax County and the rural counties of Washington and Pulaski are so stark. This is obviously not a new reality. Horace wrote in Ancient Rome about the City mouse and the Country mouse. Unfortunately, we don’t seem to have learned a lot about how to understand each other and our differences. Empathy and compassion would seem to be the first step to finding common ground.

I found a long drive through unfamiliar territory a great opportunity to observe and appreciate our differences and take a look at my own old ideas based on prejudice and unfounded biases. Our return trip occurred on September 11, the 21st anniversary of the attacks on the World Trade Center and the Pentagon. One commentator concluded his reflections on 9/11 by remembering John Lennon and his song Imagine. To imagine a better world, we first have to notice what is happening and what we tell ourselves about it.